Following the UK Government’s adoption of net zero targets, there has been a welcome push to augment our nation’s renewable energy infrastructure, and we need to expand our capacity to meet future consumer demands.

The UK is well-placed to achieve those targets. We are acknowledged, worldwide, as an epicentre of technological innovation; bringing together the industrial and service experience, and academic insights needed to deliver mega-infrastructure of this kind.

Osprey has been working alongside some of the leading companies in renewables for many years – in the offshore sector in particular. Our work with the Offshore Renewable Energy (ORE) Catapult to support GE Renewable Energy is a good example of the progress being made – highlighting the efficiencies possible in the supply chain, thanks to proactive collaboration. 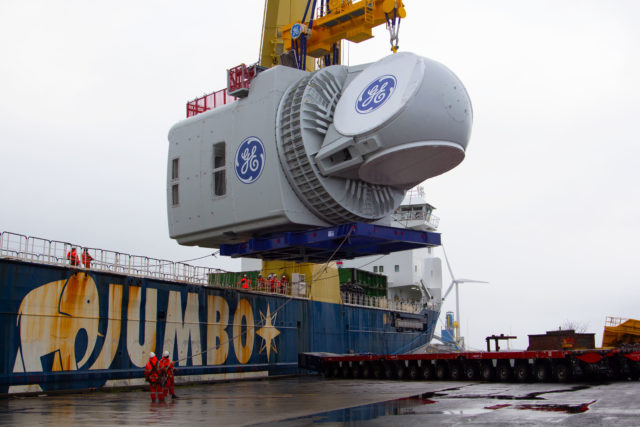 Wind power is one of the fastest-growing renewable energy technologies. It’s clean, free and readily available. As an island nation, the UK is well placed to take advantage of this great, renewable energy source. The UK has high average wind speeds and currently has the most installed offshore wind capacity of any nation in the world.

At the end of 2019, installed capacity of onshore wind of 14.1GW represented almost 30 per cent of all UK renewable capacity, the highest share of renewable technologies, with offshore wind delivering just under 21 percent. More importantly perhaps, in the space of a year, UK offshore wind capacity increased by 1.7 GW (21 per cent) – securing its place as one of the lowest cost options, cheaper than new gas and nuclear power.

Wind power generation plays an increasingly important role in the way we power our homes and businesses. It’s the backbone of a clean, reliable and affordable energy system, and the UK offshore wind sector has ambitious plans for growth. However, if the UK wants to deliver better energy, then we also have to invest in bigger technology.

GE Renewable Energy chose ORE Catapult to be its partner to put the world’s largest wind turbine in operation today through its paces – the Haliade-X 12MW offshore wind turbine.

Just one of GE’s Haliade-X 12MW wind turbines is able to power up to 16,000 European households, with typical North Sea wind conditions.

It’s the world’s most powerful offshore wind turbine in operation today. It’s also the most efficient ocean-based wind platform – it has a leading capacity factor of 63% (that’s the average power generated, divided by the rated peak power). Working at full capacity, the Haliade-X 12MW can also deliver comparative savings of up to 42,000 metric tons of CO2 per year, the equivalent of emissions from 9,000 vehicles.

All in all, this means GE’s investment in the Haliade-X will help make offshore wind even more cost-effective. However, before deploying this technology offshore in an operational capacity, this nacelle – around the same size as six double-decker London buses – will undergo rigorous testing at ORE Catapult’s Blyth facility to ensure it can withstand many years of successful operation at sea. 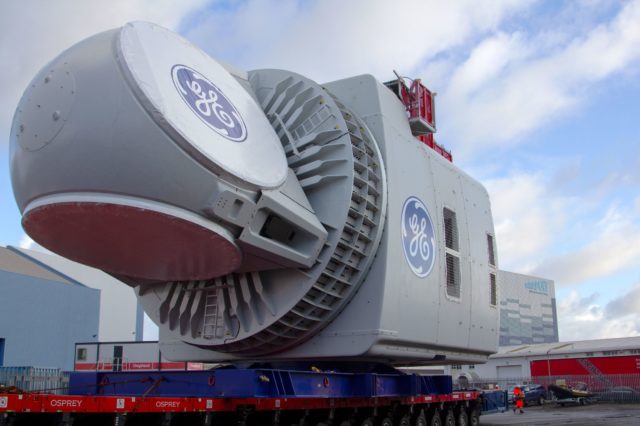 ORE Catapult operates a multimegawatt powertrain test facility in combination with an 18MVA grid emulation system, making it one of the most sophisticated test and validation platforms in the world. It’s the perfect platform for bringing future energy systems to market, and GE Renewable Energy has invested heavily in test, research and development activities on the Haliade-X in the UK.

In November 2019, GE sent its Haliade-X test nacelle to ORE Catapult’s test facilities – shipping it to the Port of Blyth, in Northumberland.

Situated mid-way between Aberdeen and Great Yarmouth, the Port of Blyth has had a long association with the wind energy sector – Blyth was the home of the first offshore wind farm in the UK and is where ORE Catapult’s National Renewable Energy Centre is located. We know the Port well – we’ve delivered Port Services and specialist logistics here for many years. 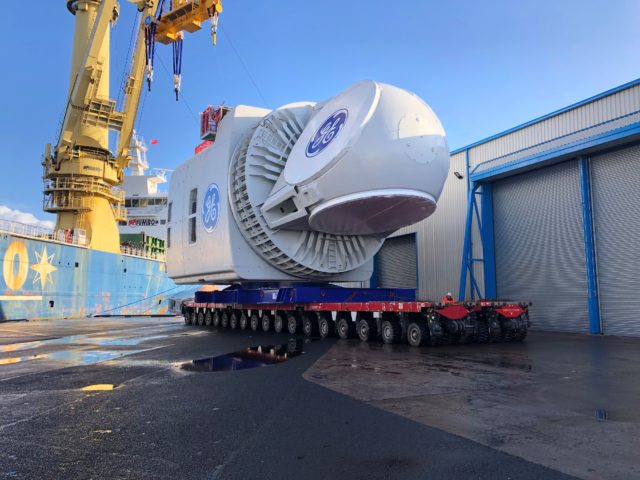 Osprey was tasked with the transport of the nacelle from a berth at Port of Blyth to ORE Catapult’s testing facility. This involved receiving the nacelle from the Jumbo vessel to our SPMTs, which had been engineered in a 4-file, 18-axle configuration to support the weight and dimensions of the nacelle. Prior to this our engineers had worked to ensure the hydraulic stability of the SPMTs as well as the load – making sure it was transported safely on the route to ORE Catapult’s test facility.

Once the nacelle was secured on the SPMTs, we transported under escort through the Port of Blyth and then lowered it into position onto a supporting frame within ORE Catapult’s facility. Whilst on the supporting frame, the Catapult’s engineers readied the unit in advance of its connection to the facility’s Force Application System (FAS) – the system that simulates extreme offshore wind conditions in an accelerated timeframe.

To install the nacelle to the FAS, we had to engineer a solution that could lift and traverse the 720-tonne unit, ensuring the nacelle was positioned to precise measurements to the FAS. Our solution comprised a pair of gantry systems, working in unison. With both gantries running at the same time, we lifted the nacelle off the ground and traversed it – 16 metres – along the gantry tracks at a height of four meters from the ground. By insisting on millimetre-correct tolerances at every step of the project, our team prevented any issues arising during the nacelle’s lifting operations.

From the start, we had worked closely with the teams at ORE Catapult, GE and the Port of Blyth to make sure the transport and lifting process was possible. We made sure the transport route was suitable and that all turning points could be achieved; and ensured the nacelle’s final location would couple to the ORE Catapult FAS within one millimetre. This level of detail in the planning phase made sure we could guarantee safe transport through a busy port area and on time, on budget, safe unloading and installation within the testing facility.

Want to learn more? Contact us for more details. 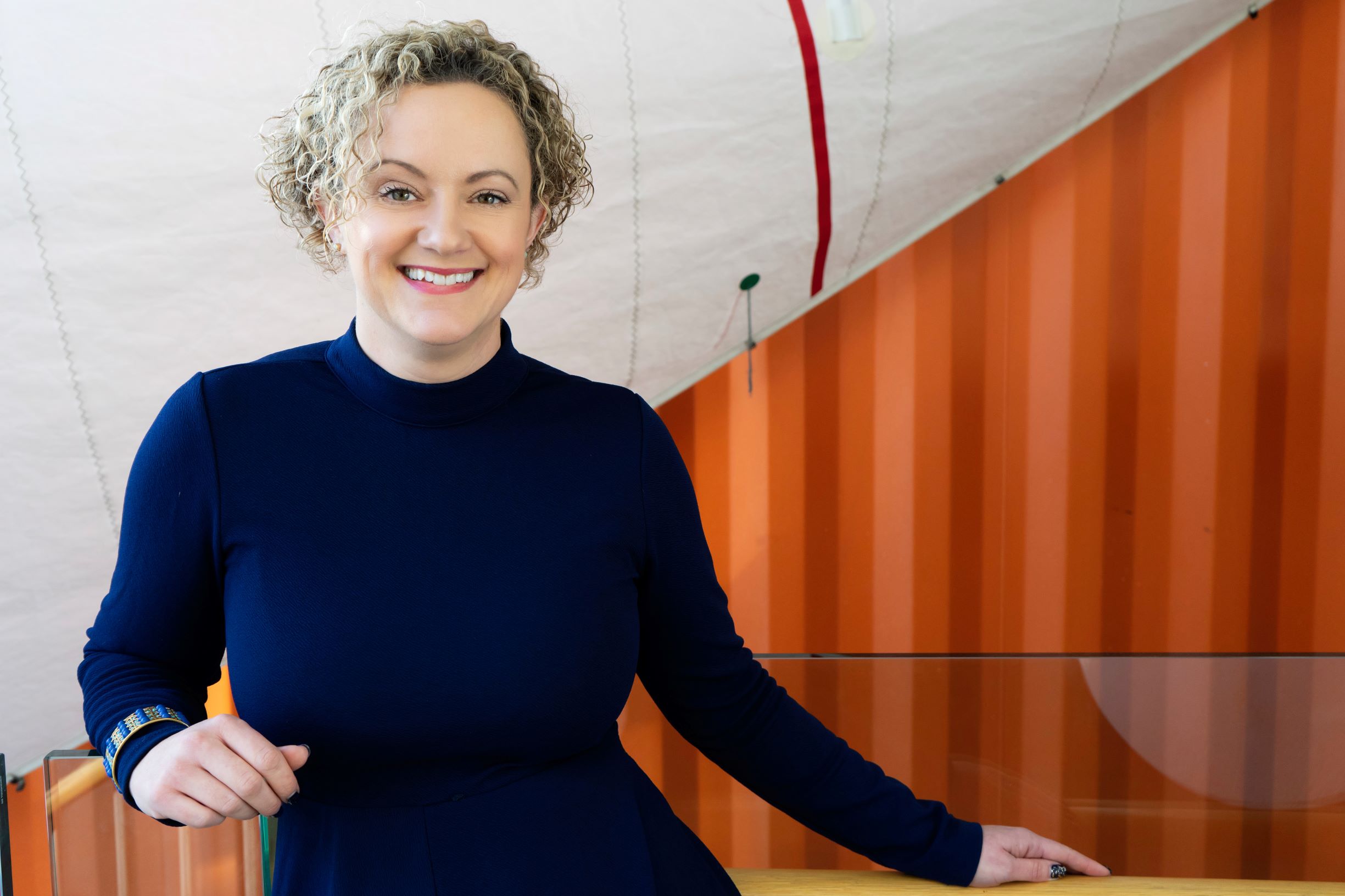